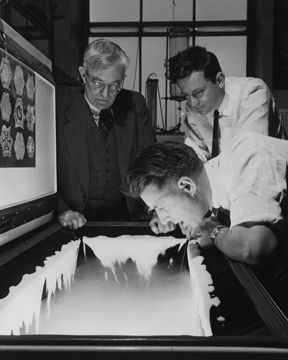 In 1946 scientists Vincent Schaefer and Nobel laureate Irving Langmuir at General Electric Research Laboratory in Schenectady, USA, worked on a way to experiment with overcooled clouds, using a kind of freezer lined inside with black velvet that performed the function of a cloud simulator. Schaefer tried with hundreds of capable agents with some potential to stimulate the growth ice crystals (talc, salt, powders and various chemical agents) with poor effects.

On a very hot summer day, Schaefer tried to perform his routine experiments, but realized that the freezer was not able to lower thetemperature to the required levels, so it did not generate the expected cloud. For that reason he added a piece of Dry Ice, with the intention of only lowering the temperature. But he immediately noticed a blue vapor followed by an explosion of millions of small ice crystals, reflecting the rays of light illuminating a cross section of the chamber. He discovered, by chance, how to transform the supercooled water into Ice Crystals.

That same month, Schaefer’s colleague, the leading atmospheric scientist Dr. Bernard Vonnegut attributes the discovery of another method to “sow” very cold water clouds. Vonnegut conducts his discovery by reviewing chemistry library material and conducting experiments with iodides and silver to produce silver iodide. Both methods were adopted for use in cloud seeding during 1946.

Schaefer discovered a way to alter the heat content of the cloud, by lowering the temperature of the cloud to force the creation of ice crystals. Meanwhile Vonnegut altered the crystalline structure of formation, contributing nuclei of freezing to the cloud.

The first attempt to modify natural clouds in the field through cloud seeding was made in northern New York on November 13, 1946. Schaefer was able to cause a snowfall near Mount Greylock in western Massachusetts, afterr releasing six pounds of dry ice in the cloud from an airplane.

Dry ice and silver iodide are agents that have proven effective in changing the chemistry and physics of overcooled clouds, thus useful for increasing winter snowfall in the mountains and under certain conditions, avoiding lightning and hail.